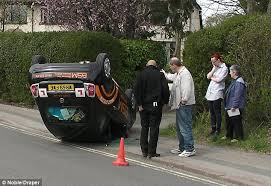 …or, like the car in the picture, will your case come a cropper when your expert “struts his stuff” at trial?

In the old days, a reasonably competent chartered accountant could feel quite comfortable giving expert evidence at trial, without special training, and without feeling that one needed to be a member of that exalted profession of expert witness.

But now it’s very different.  There is no place for enthusiastic amateurs or “wannabees” in courts of law.  Solicitors must specialise, and must work to ever higher standards (and for less reward?); so too must the accountant who professes to be an expert become a member of two professions: an excellent accountant, of course, but also a trained and experienced expert witness.

You will choose your experts carefully so as not to waste your own good work or damage your client’s interests, and that means choosing someone who is also a member of that second – crucially important – profession.

I have been a full-time expert accountant now for over 25 years, when I passed my audit practice to other partners on being appointed expert defence accountant to the chairman of Barlow Clowes.  For younger readers, this was the first really big Ponzi scheme, like Bernard Medoff with a couple of noughts off the figures!  I worked on that case full-time with a team of 6 for 8 months, and my report of 43 ringbinders was agreed by the Serious Fraud Office.  Our client was found Not Guilty on all charges, whereas Peter Clowes the MD was jailed for 10 years.  Now there was no turning back; my clients had gone to other partners, so I had to become a full-time forensic accountant.  I had learned all the skills at The Academy of Experts – where I am now a fellow – but found at later trials that I was often against a chartered accountant who hadn’t a clue about expert evidence, and who did his client no favours at all.

I remember one early case where my valuation of a business was challenged by a wannabee.  His report was lightweight.  At the start of the trial, the judge said that he had often relied on the opinions of Mr Makin (me!!) when he was at the bar, and held him in very high regard, so he would recuse himself to another judge if that caused the other side any difficulty.  The other side abandoned the claim during a 10-minute adjournment.

This was not good.  Not only did such amateurs not help the client, but there was a risk of the chartered accountancy profession being brought into disrepute, as Professor Sir Roy Meadow almost did for the medical profession.

So when I became a member of committee for the Forensic Special Interest Group at ICAEW, the idea I brought was for an accreditation scheme – for the ICAEW to award a kite mark to those members who had taken the trouble to learn this second profession, and who could be relied on to write a CPR compliant report to a high standard, to manage a meeting of experts, to understand Part 36, to understand the dynamics of mediation, and to give excellent expert testimony.

It took 8 years to develop, but now we have it.  One can now be accredited as a forensic accountant by ICAEW in partnership with The Academy of Experts as an accredited expert witness.  Look on either organisation’s website, and you will find lists of the very few accountants who have reached this gold standard.

Then came Jones –v Kaney, where the Supreme Court removed from experts the immunity from suit which they had always enjoyed.  This was a shocking example of an expert being out of her depth.  Miss Kaney, a clinical psychologist, was cajoled by her opposing expert into signing a Joint Statement of Experts which he had drafted, which did not reflect what she had agreed, and which she later admitted she had not even read!  There was discussion among their lordships, about whether this would discourage experts from acting.  It hasn’t, at least not among the forensic accountants I know.  And nor should it; the dabblers should be discouraged, certainly, but serious experts have nothing to fear if they continue to act with reasonable diligence and competence.  The point is that being an expert accountant is not simply a sexy thing to do between audits, as perhaps it was back in the day, but a serious professional activity, only to be practised by members of that second profession.

And now we have the Hot Tub, where at trial both experts sit in the witness box at the same time (if space allows!) and the judge chairs a discussion between both counsel and both experts.  It saves time, and allows the important matters to be flushed out. Any of them can ask questions of any other, and everyone must be on their toes and know their case inside out; so there is no place for the partner from the big firm with a team of accountants working for him, who takes over the case when the trial is imminent.  The accountant giving the evidence must know every scrap of detail, and be intellectually nimble enough to see the case in the round, to see the gaps in the other side’s evidence, and to meet challenges even from the expert accountant from the other side.  This is very different from being cross-examined at a leisurely pace by a barrister whose knowledge of financial matters may be shallow; it is not for the faint hearted.

The hot tub has been used in Australia for some time, and to a limited extent in arbitrations in the UK, which is where I have had my hot tub baptism.  Lord Justice Jackson believes it leads to savings in costs, so next it may well be used in a court near you.

The moral is self-evident: choose your expert accountant very carefully, and don’t let a dabbler spoil your good work.  It is essential to have an “expert” who truly is an expert.

Read next blog ‘Is This The Worst Expert Witness Ever?’